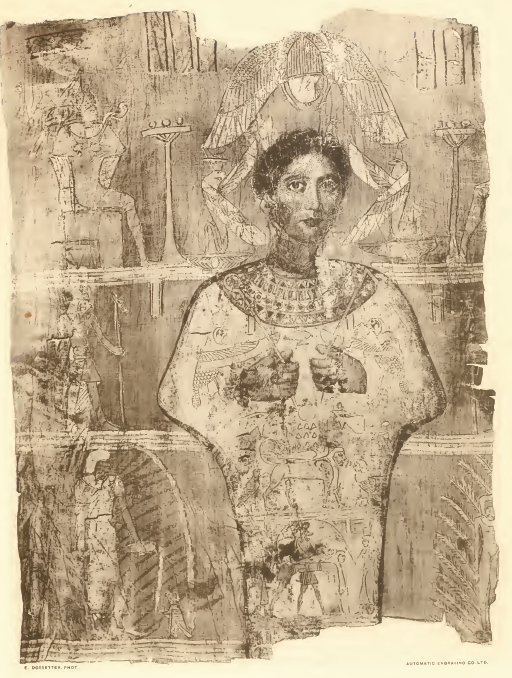 Licensing details
Images included (unless otherwise stated on the image), are not subject to any current copyright restrictions because the term of copyright has expired. All of the images may be subject to other third party rights, such as rights of privacy. You are responsible for obtaining other such necessary permissions for reuse. For further information please contact the Egypt Centre.

Fine Portrait on Linen; a large piece of linen, the covering of a mummy, with the figure of a female of considerable beauty painted upon it, with dark hair and eyes, wearing earrings, draped in mummy cloths of purple colour, with a deep collar upon her breast; her hands project; in one she holds a crook and in the other a flail; below each shoulder is a hawk with outspread wings wearing a disk, holding on to a ring with his feet. Beneath the necklace in the centre is an ibis walking; below the hands, which project from the wrapping, is the disk, whilst under it are nine triangles arranged in threes, one over the other, upon each side of which is the ut'at or eye of the Sun or Moon. In the next division is a bier in the form of a lion with a human face, with a mummy placed upon it, on each side of which is a human-headed hawk or soul, and below it is another representation of the mummy on the bier, attended by Anubis, with Isis and Nephthys at each end. The cloth is divided into three parts with three horizontal lines; the first ending even with the shoulder, the second with the elbows, and the third below the vignette of Anubis and the bier. On the left hand side of the first is Osiris seated upon a throne; in front of him is an altar; on the right hand only a leg of a seated figure with the altar in front is seen. Above the portrait of the woman, over her head, is a winged scarabsus with outspread wings. Upon each side of the face is the winged urseus resting upon a basket; upon one is the crown of Upper, and on the other the crown of Lower Egypt. At the top of this division are six blank lines arranged vertically for the insertion of names. In the second division is Ra, wearing the disk, holding in his left hand a sceptre, in the attitude of walking, a tunic round his loins, with two vertical lines in front enclosing a space for his name, which is blank. In the third division is Hathor in the midst of a tree, wearing a blue wig and collar, and long garment; in her right hand she holds a wand or sceptre, and in her left a vase, out of which she is pouring a liquid which is caught in the hands of a soul; on the opposite side is a portion of the figure of Isis in the Persea tree. This as a portrait is very fine work, and probably the earliest known. (See Archceologia, Vol. LIV., pp. 363–368) 1st century A.D., Graeco-Roman. See Plate I. 3 ft. 10 in. X 2 ft. 10 in. Aḥmîm.

Link To Museum Catalogue
https://collections.mfa.org/objects/148403/
Link preview not available; click the link above to open in new tab

Back | Feedback about this object