Frederick George Hilton Price was born in London, 20 August 1842, son of Frederick Price and Louisa Timpson. ‘Hilton’ was one of his forenames but seems to have been promoted to become a part of his surname, practically if not legally, early in his adult life. Frederick Price was a banker who eventually became partner in the London private bank Child & Co., and Hilton Price joined him at Child’s soon after leaving school.

By 1887 Hilton Price was a well-to-do man, married with two children, established in succession to his father as a partner in Child’s (he would become senior acting partner in 1901), and a founding member of the Institute of Bankers. Prosperity allowed him to pursue his antiquarian interests. He carried out excavations in the UK and formed collections of Egyptian and British objects, many of which he researched and published himself. He also brought his managerial abilities to bear on the antiquarian world: he served on the committees of the Anthropological Institute, the Society of Biblical Archaeology (joined 1878, member of council 1881, Vice-President 1901), the Geological Society, the Egypt Exploration Fund (becoming President in 1905), Flinders Petrie’s Egyptian Research Account (from 1894), and the Society of Antiquaries (becoming Director in 1894). 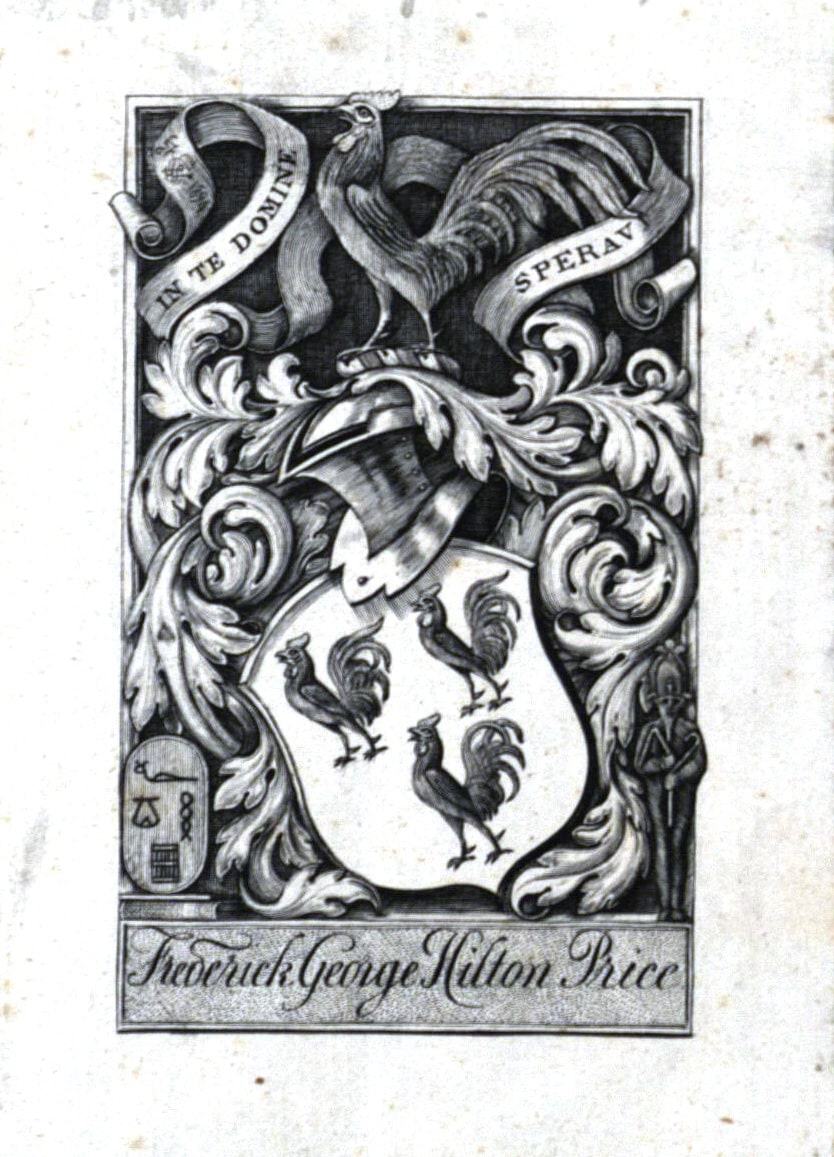 ‘The adoption of the Overland Route to India via Egypt, and the opening of the Suez Canal in 1869, have drawn the attention of the civilized world to Egypt to a remarkable degree,’ Hilton Price stated in the preface to the first printed volume of his catalogue. The last third of the nineteenth century saw an explosion of financial and political interest in Egypt, effectively stemming from Mohamed Ali’s modernization of the country and his heirs’ construction of the Suez Canal. The assumption of Franco-British control over Egyptian finances in 1876, and the invitation of British armed forces to quash a rebellion in 1882, led to the so-called ‘veiled protectorate’, which further encouraged British investment in Egypt. Ancient Egyptian objects were part of this. Not only did emboldened tourists acquire objects through a legal (and semi-legal) market for antiquities, but foreign residents—soldiers, diplomats, priests, doctors, businessmen—also collected souvenirs of their new home. Foreign excavators, notably in Britain the Egypt Exploration Fund and Flinders Petrie’s various combines, benefited from generous official divisions of their finds, which were then passed on to sponsoring institutions and individuals.

It was in this milieu that Hilton Price formed his Egyptian collection, with surviving documentation showing that he was already a seasoned collector by the early 1880s. He regularly exhibited Egyptian objects from his collection for discussion and ‘publication’ at the Society of Biblical Archaeology, and was a committee member of, and significant lender to, the 1895 Exhibition of the Art of Ancient Egypt organized by the Burlington Fine Arts Club. He funded Petrie’s work from the 1880s, and later John Garstang’s excavations at Abydos and Beni Hasan. He set up and hosted a hieroglyphic reading group later tutored by Wallis Budge, and organized subscriptions to defray the cost of turning Budge’s transcriptions into a book for the public. Hilton Price also speculated with his collections, regularly consigning antiquities for sale at Sotheby’s, the leading British auction house for antiquities, as part of a continual process of expanding and upgrading his collection.

Hilton Price’s non-Egyptian collections and publications have, naturally, received little attention from Egyptologists, but are likely to have been just as—if not more—significant to him as his Egyptian collections. His horological collection was important enough for him to have lent it to the Victoria and Albert Museum, and it was sold en bloc after his death for £5,000 to the American collector J. P. Morgan (whose son donated it to the Metropolitan Museum); a significant part of his British collections was purchased and donated to form the nucleus of the London Museum, which opened in 1912, later becoming part of the Museum of London; other objects, including his collection of spoons, were sold at Sotheby’s between 1909–11, while his coins were sold at two sales in 1909 and 1910.

Hilton Price wrote and published two lavish catalogues of his Egyptian collection in 1897 and 1908, which describe, and in many cases illustrate, 5027 numbered objects or groups of objects (including objects with a, b, c etc suffixes, this rises to 5288 objects, with scope for further expansion among entries for ‘a lot’ of objects). These numbers were written or printed on adhesive labels that Hilton Price fixed to the objects. Long out of copyright and now available online, the two printed catalogues are the backbone of this database. 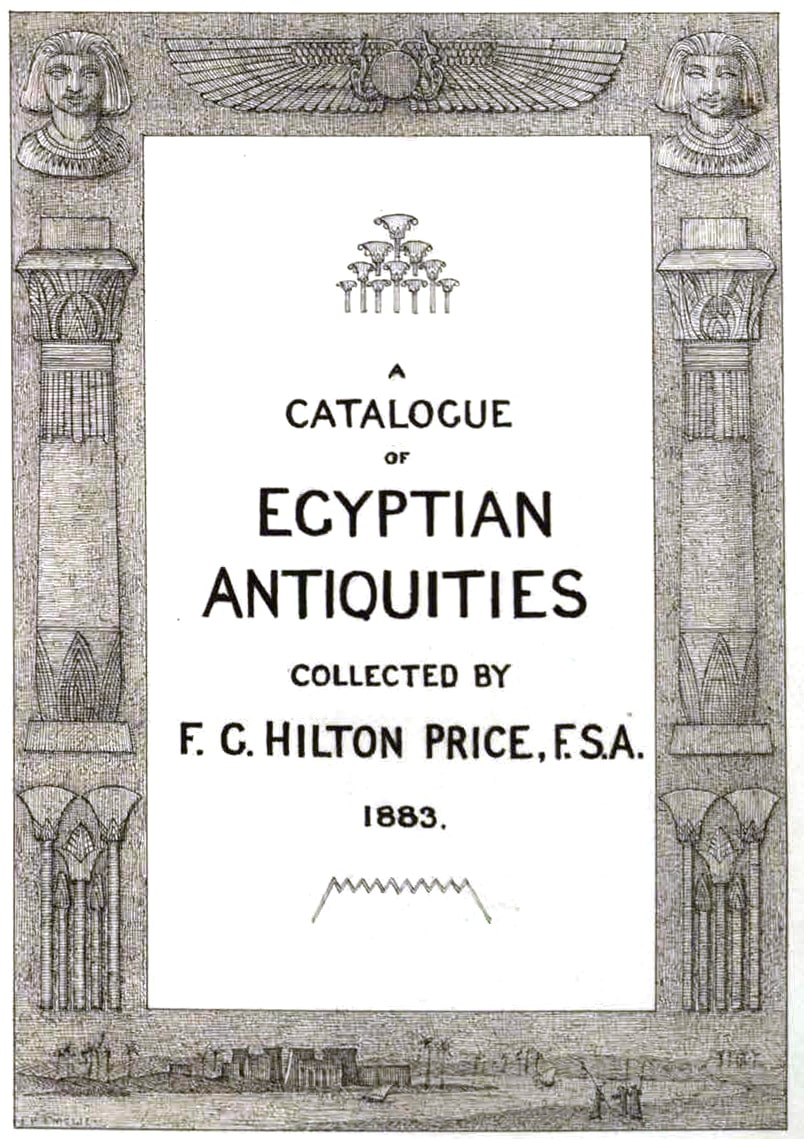 Fig. 2: Frontispiece from volume 1 of the manuscript catalogue

The printed catalogues were not, however, Hilton Price’s first venture at cataloguing his collection. Four bound volumes in the possession of one of Hilton Price’s descendants contain manuscript entries for many of the objects in Volume 1 of his published catalogue. These entries were not copied verbatim by the printers: they use a different classification system to, and illustrate many more objects than the published catalogue, and often provide information on the origins of objects not included in a catalogue for public consumption. The manuscript catalogues have recently been digitized and transcribed at Swansea University, and data from them are being included in this database, linked where possible to objects in the published catalogue. 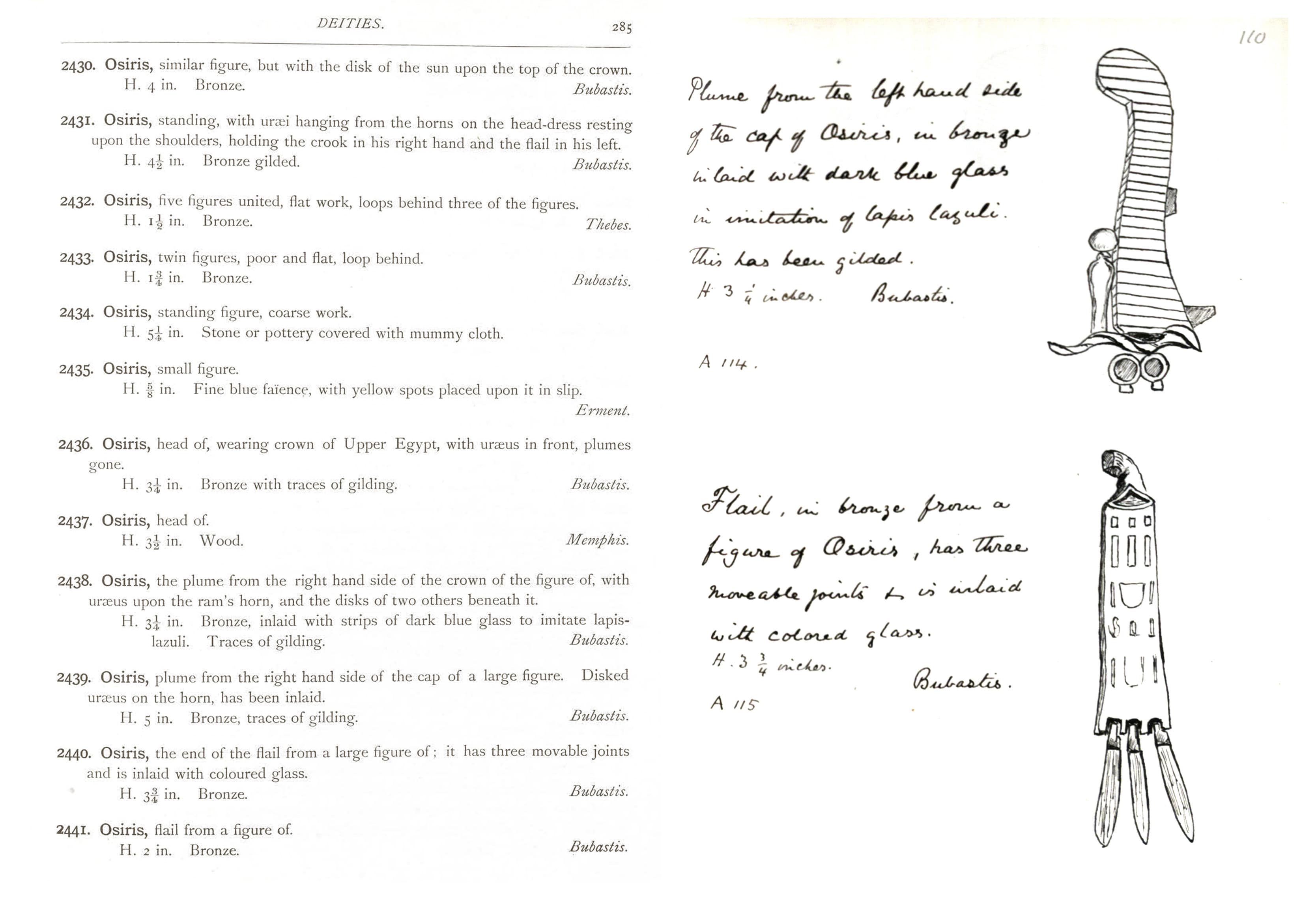 At Hilton Price’s death in March 1909, his will entrusted his collections to his executor Charles Hercules Read (1857–1929), President of the Society of Antiquaries and Keeper at the British Museum. Read was commanded as trustee to sell all ‘things in the nature of curios of which I shall at my death have a collection’ and to invest the proceeds and disperse them to his heirs. Henry Solomon Wellcome (1853–1936), pharmaceutical magnate and avid collector of ‘medical’ objects, enquired about the Egyptian collection in June 1909, but received no reply from Read. The Egyptian collection was finally sold at Sotheby’s in London over eight days in summer 1911. 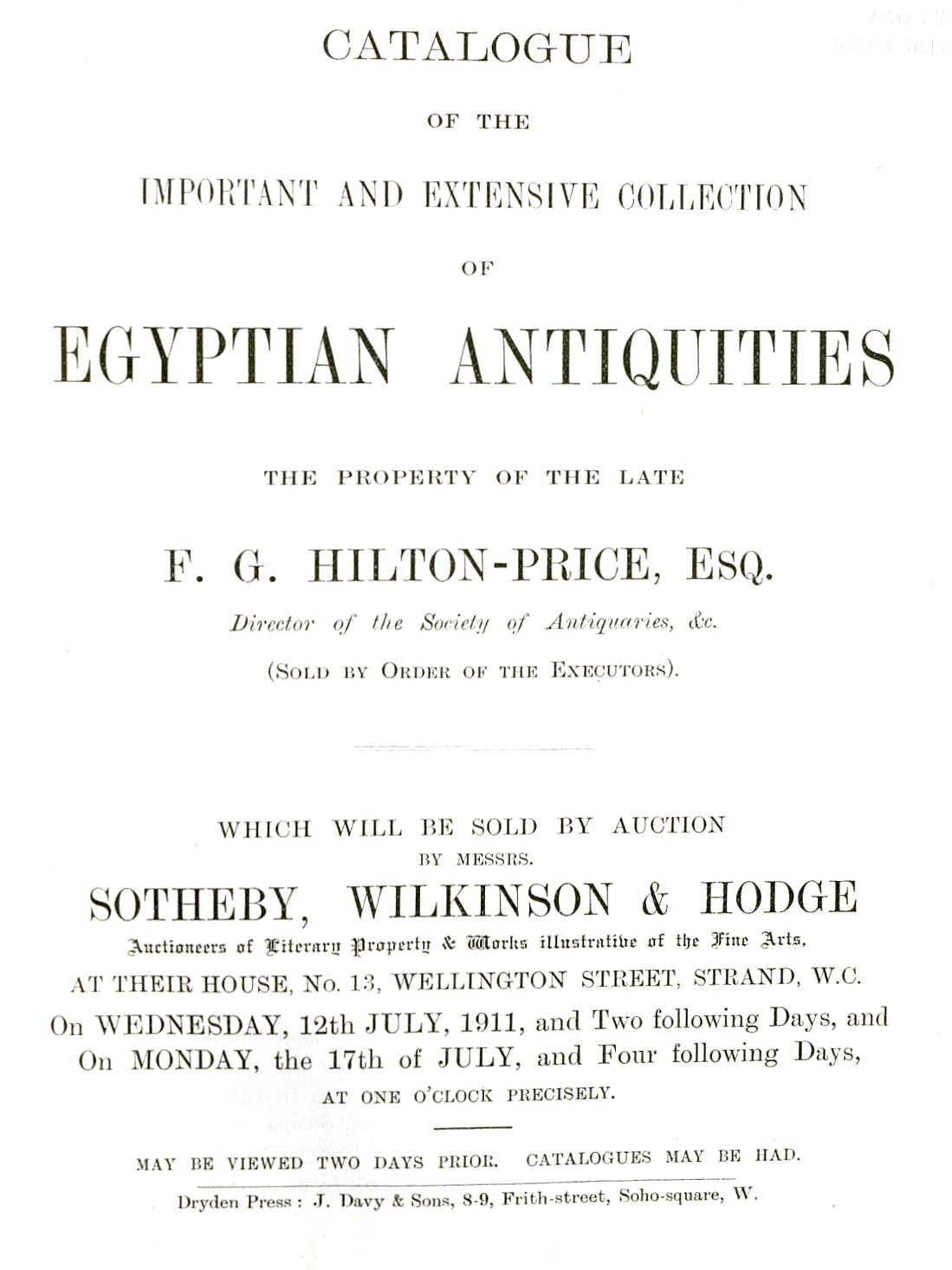 Hilton Price’s 5089 numbered objects (published up to 5027, the others acquired afterwards) formed the largest group of Egyptian antiquities to come on the British market in living memory, and they fetched a respectable £12,039/18/6 – the equivalent of somewhere between £1,200,000 and £11,500,000 today, depending on the metrics used. The text of the sale catalogue naturally drew on the published catalogues, but perforce did not include as much information, and listed and grouped objects in different combinations—groupings made not to inform, to but rather to sell well. Just under 40% of the objects had their published catalogue numbers listed in their descriptions in the auction catalogue. A concordance of object numbers to the auction numbers was compiled and published by Charles Cornell Van Siclen III in 1985. In order to help viewers at the sale, and packers afterwards, many objects were given labels with the lot number on, to join Hilton Price’s own numbered labels. 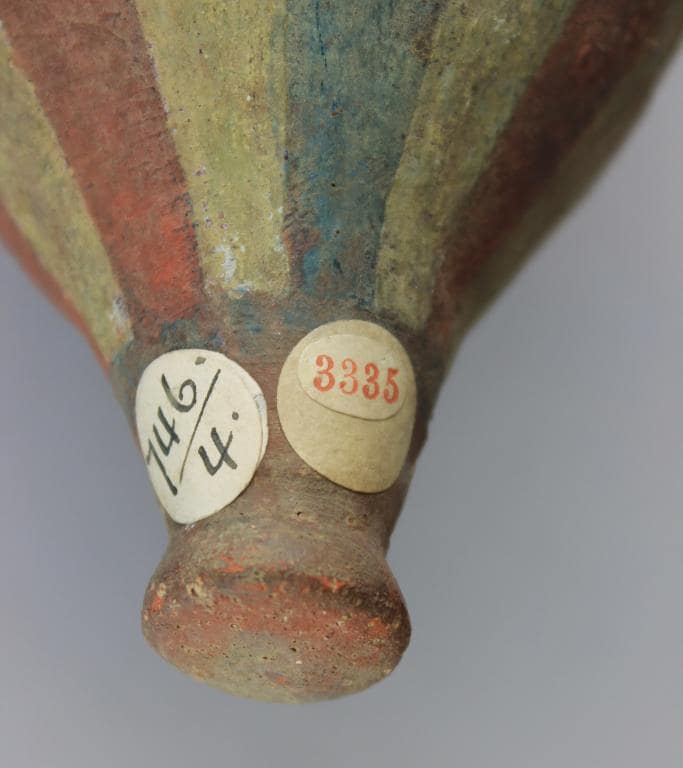 Wellcome was one of 71 purchasers at the sale, according to annotated copies of the auction catalogue—although Wellcome did not bid in person for his embryonic Historical Medical Museum (HMM) but entrusted the bidding to his assistant Henry Charles Bourne (1858–1936). Wellcome/Bourne acquired 81 lots containing at least 641 objects for £282/4/- or, 5.3% of the lots containing 10.9% of the objects for 2.3% of the total cost. Wellcome ended up as the largest purchaser of objects at the sale by a considerable margin, and commissioned a 73-page handwritten Inventory of Objects purchased at The Hilton Price Sale. Sothebys, July 12-July 21 1911, now in the Wellcome Collection archives (WA/HMM/CM/Sal/20/292). This was undertaken by the Assyriologist William St. Chad Boscawen (1855–1913), who was tasked by Wellcome to catalogue the Egyptian antiquities. Boscawen gave objects a new number, prefixed HP, and referenced the auction lot number and (where known, whether from the auction catalogue or the objects themselves) Hilton Price’s collection number. The list may even have been checked over by Wellcome himself, as his initials HSW accompany many of the objects. Objects and inventory were connected by affixing round plain white paper labels, containing the HP number handwritten in black ink, to the object. 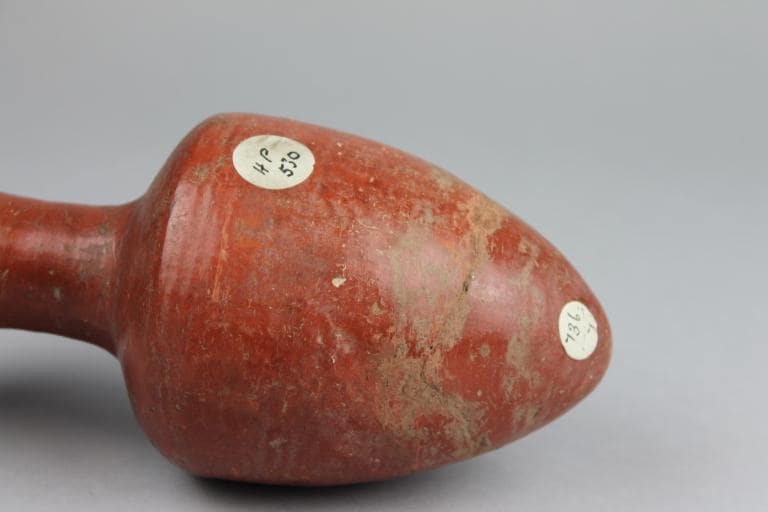 Private collectors stocked up at the Hilton Price sale. The Rev. William MacGregor (1848–1937), a near contemporary of Hilton Price, commissioned the London dealer Spink to purchase a number of pieces: these would be sold again at the even larger and more successful auction of his collection in 1922. Lord Carnarvon’s purchases at the sale, made through the London dealer Feuardent, would pass to the Metropolitan Museum in New York in 1926. 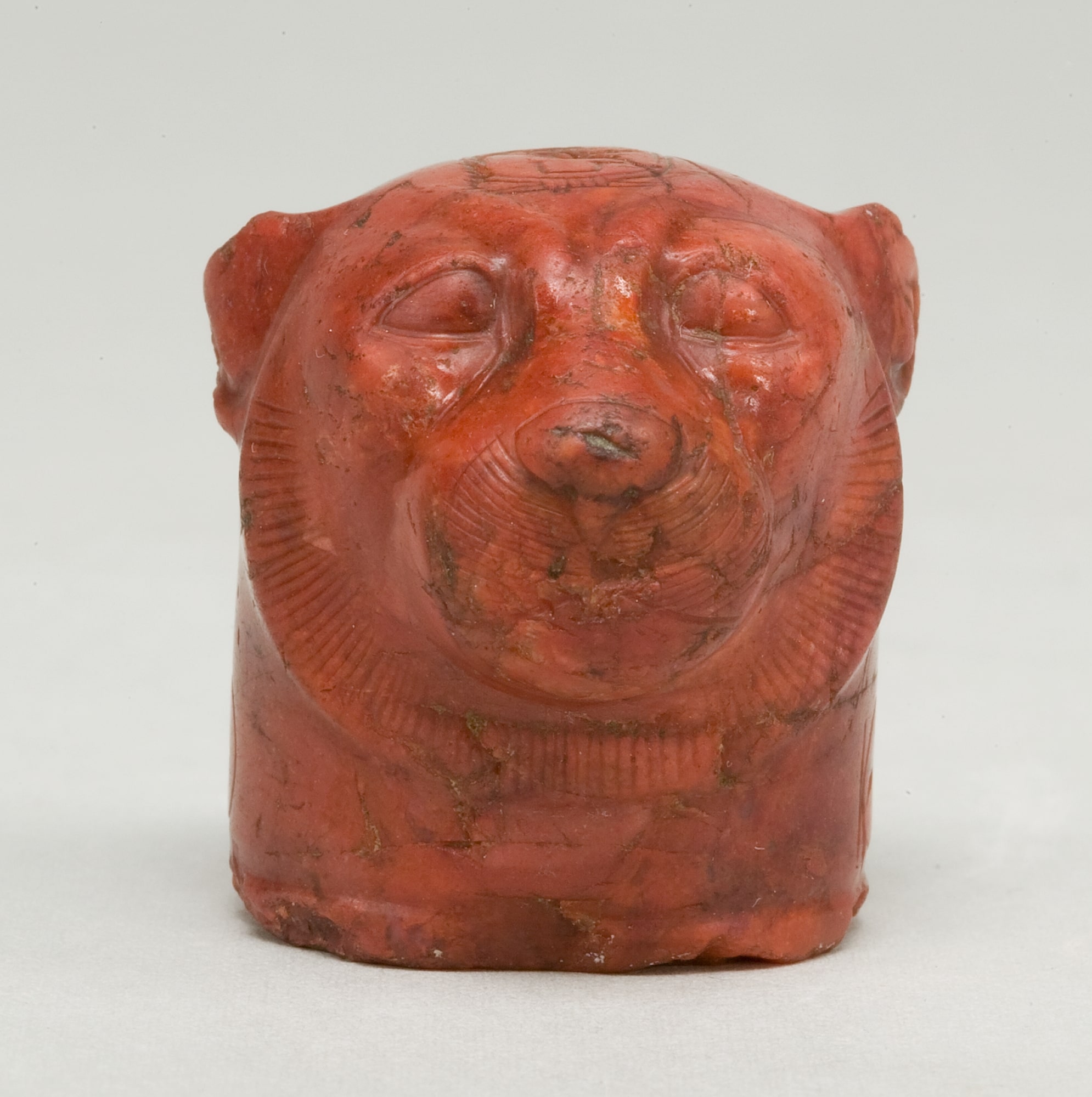 William Randolph Hearst (1863–1951) spent over £1,000 on 108 lots through the dealer William Permain, while the British collectors Joseph John Acworth (1853–1927) and Edwin Sydney Hartland (1848–1927) bought in their own names. The largest purchasers by number of lots and objects, however, were dealers, such as S. G. Fenton, G. F. Lawrence, and Robert de Rustafjaell (1859–1943) from London, Kalebjian Frères from Paris, and Ralph Huntington Blanchard (1875–1936) from Cairo—a reminder of the global nature of the trade in Egyptian antiquities.

Wellcome acquired many more Hilton Price objects after the sale, both from dealers and sales of collections formed after 1911. The Hilton Price connection was sometimes noted when the objects were catalogued in the Welcome Historical Medical Museum (WHMM), or can be reconstructed from the survival of a Hilton Price collection label or sale lot label on the object itself. 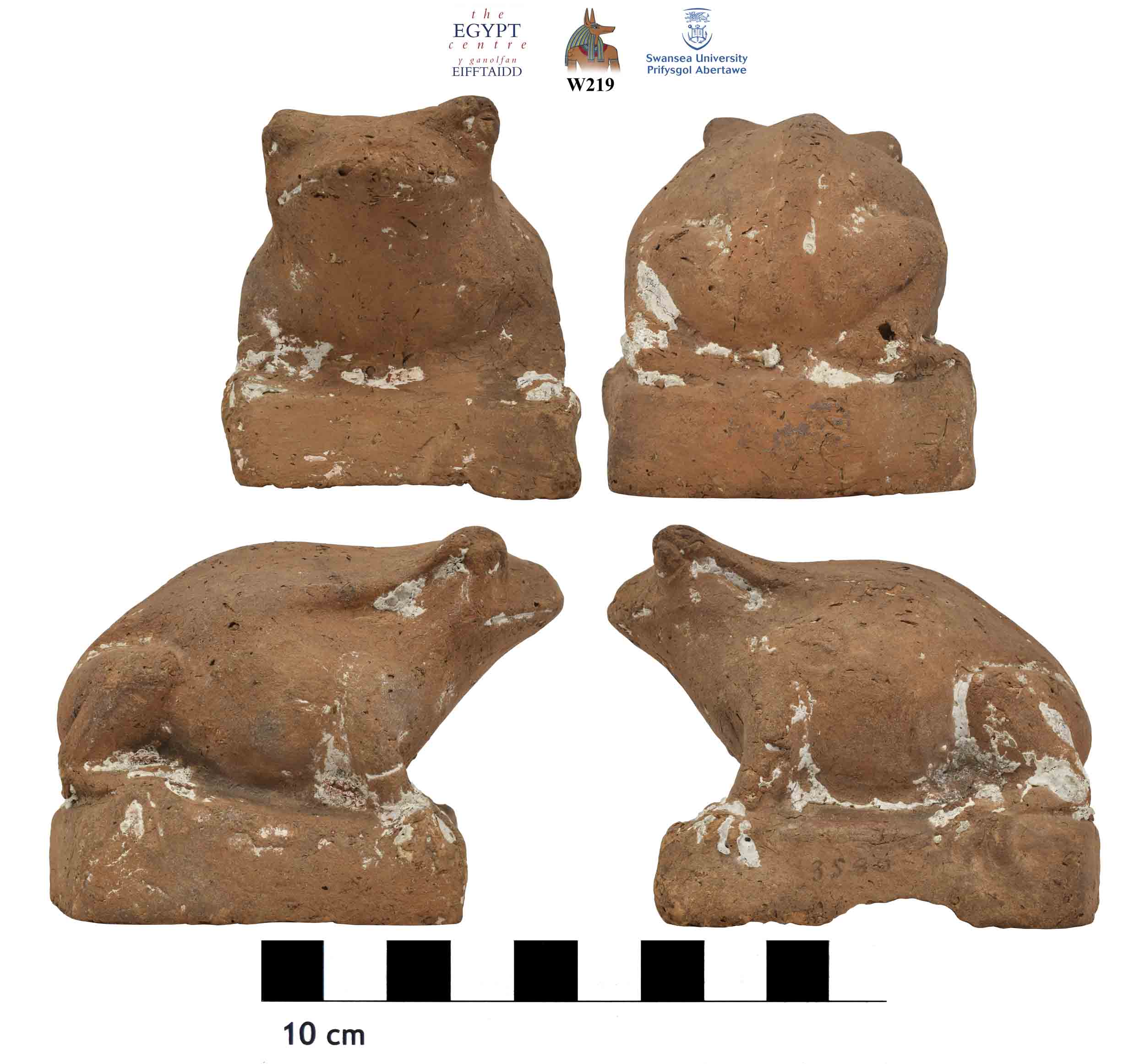 Wellcome died in 1936 and his vision for his sprawling collections (of which the roughly 20,000 Egyptian objects formed a small percentage) died with him. The trustees of the Wellcome Foundation decided to dispose of what they considered the less relevant parts of his collections, a process that took nearly fifty years. Museums around Britain received donations of Egyptian material; most significantly in the case of Swansea University, where the donation transformed the University’s collection and study of Egyptology. Recent work on the Egypt Centre’s collection has focused on the histories of objects, and many Hilton Price objects have been re-identified in the Egypt Centre and elsewhere.

There is clearly no shortage of information about Hilton Price’s Egyptian objects. The Hilton Price Virtual Collection, combining manuscript catalogues, printed catalogues, sale catalogue, Wellcome list, and object labels, should allow many hitherto anonymous objects to be identified as having belonged to Hilton Price, and their paths from Egypt to their current locations mapped out in considerable detail.

Hardwick, Tom. ‘Many marks of many hands’ (article on Hilton Price’s manuscript catalogue, in press; source of this introduction).